Why do people diss the cross

Joined Feb 20, 2019
·
9 Posts
So , of course as an owner of the eclipse cross, i tend to follow the hearsay of what i bought. Whether it be from other forums , youtube videos or just plain old news articles, i seem to find somwone who dislikes it. Now dont get me wrong, people like what they like, i personally find this vehicle good looking in all ways, for what its worth.

Id like to point out i never owned a car before this, so my judment may be off. What i dont get is how people say it feels sluggish, or steering isnt as good as other vehicles. I personally took this vehicle to 170km/h,(i dont drive like this for long, or while there is traffic on the road) and it may be no race car, but the time ive been driving it i have had 0 isssues passing anyone, at any speed. There hasnt been anyone yet to keep up to this vehicle on highway or backsreet but i do push it, so in the end, if others have power nonody uses it anyway. So why the videos, Of how it has no power? Is it just because im not use to other vehicles that i have nothing to compare to?

Same applies to steering, i feel its right on track. Its so easy to maneuver in town and back streets. How do you guys feel about it? Is it garbage giddie up and steering ? Am i bias or is it decent?

Just to point out im comparing to same class of suv.
O

It has all the safety features you need, it's has the power when you need it and it has the looks.

What it doesn't have is, GPS navigation. I am not a fan of android auto.

Maybe those who knock the EC are envious, regardless, I expect they have never driven one and read fake news in their spare time.

A mate of mine knocked my EC as not having power, didn't like the looks etc. then his wife said she wanted to buy one, the truth was, they couldn't afford it and ended up with a Mazda 3. Instead of being truthful in that he couldn't afford an EC, he rubbished mine.
S

Joined Feb 20, 2019
·
9 Posts
Thank you for the reasurance. I think you are right on that. People read stuff and believe it. I started thinking in reality, every car probably is hate by someone else, and probably has an article about it somehwere.

I agree with the gps , or lack of. I thought it was strange, but got over it fast enough learning android auto and its features. Of course using phone cost data, and some areas have no signal ( wooded areas), so its not perfect but its a semi solution. I also thought of getting my own gps to put in the car, but only if id ever travel to some lost land where i have no idea where to go.
A

Joined Jan 16, 2018
·
77 Posts
As with anything on the Internet, its always the people who are upset and disappointed that are the most vocal. Sure there are some shortcomings and criticisms to be made about the Eclipse Cross, but it delivers exactly what Mitsubishi set out to do. Its affordable, stylish and a decent performer. Most of the reviews online are based upon the spec sheet alone and I doubt many publications actually took the time to see how it fares performance wise against other crossovers in this segment.

Joined Oct 22, 2018
·
167 Posts
IMHO (God knows I've shared my unabated thoughts on this vehicle), as a pure passenger / commuter vehicle, the EC is a VERY comfortable ride. Even in terms of safety and average performance, it can mete out with so-called "best-in class" competitors that established industry leaders can produce. (e.g., RAV-4, CRV, Rogue, CX3, etc.)

The two criticisms I share with most in the automotive press are:


Then, also, my addition to this list --- the Mitsubishi Connect app just plain out SUCKS!
Really bad from a reliability and usability point of view.

Other than those, I should say that my opinions regarding sluggish acceleration (again, thanks to that stupid CVT) and dire performance upgrade options (ibidem, stupid CVT) are because I know Mitsubishi can do much better. (Other than the EC, I own Evolutions and Eclipses, so there.)

Beyond the criticisms, I maintain that the EC has an AWD system that's really well above average. It's quite good. (And believe me, I've driven many an SUV as well as I travel a lot for work.)
The engine is competent enough, and limited only by the transmission. From a roll, it has acceleration enough to pass without feeling like it'll break anything, and is comfortable everywhere else. The wife and I will take it on road trips over the Evo.

It's definitely a looker.

Final thought - I am also in agreement with the confusion some in the media have about the positioning of the Cross in Mitsubishi's product linup. the 2020 Outlander Sport (RVR) isn't getting smaller (as they originally announced when they introduced the Cross. From a performance standpoint, having S-AWC and a turbocharged engine makes the Cross a selling point compared to the Sport. But, I think if Mitsubishi had the right sense about them to entice the market, they'd create a variant of the vehicle that actually makes the Cross a lot sportier in terms of performance - and it really is simple:


And I'm sure it'll make a lot of people happy. And I'm not just talking about people looking for grocery getters.
P

Joined Apr 22, 2019
·
3 Posts
Eclipse cross is NOT SPORT car... Automatic is by default nonsense in car UNDER 200PS,and another "reason" not objective,just subjective...

This means quite enough...and for long driving,Eclipse cross is realy best choice..
W

Joined May 9, 2017
·
196 Posts
Mitsubishi's biggest mistake was using the Eclipse name.
By doing that they're essentially trying to pass it off as something sporty. Its actually not once you look past its sporty design. Everything else says otherwise. I'm not complaining however, its what every other automaker does.
P

Purists that love the original Eclipse will never get over the fact its now used on a CUV. From a branding standpoint the name is perfect.

Originally I was thinking Mitsubishi would follow the RVR naming scheme but didn't fortunately.

From a naming standpoint, using whatever goodwill Mitsubishi has left to bring old patrons back to the fold is commendable - and honestly, if the EC had a purist version that lived up to the old moniker, I'd be fine with it.
The sad part is that they aren't interested in doing that. They want to sell, but the problem is, they're not selling anything that makes them stand out from the crowd.

I was thinking about it earlier as I was driving to the store with the wife. Just playing things back in my head 10 to 15 years. So much good ****. What if they just used some of their older mechanical parts that worked wonders, and just reused them on the Cross.
Imagine a Pajero Evo suspension on the cross? Double wishbone with stiffer swaybars. Or, kept the 2.4L 4B12 and added a turbocharger. Heck, retained the 6G75 or a new aluminum variant of it that retained more torque, BUT had so much better fuel efficiency.
Heck, the engine design off this Cross came from the Colt Ralliart. But... of course, they cut costs every step they could to produce this cheap **** that can't be used anywhere but on this driveable heap of an identity crisis.

Heck, keep the same configuration on the Eclipse Cross as it does today, but ditch that CVT for the Getrag SST. Or an older automatic transmission that had proper gear ratios. I keep repeating myself - does it really cost you that much to reuse old tech?
BECAUSE IT'S ALL THAT OLD STUFF THAT MADE MITSUBISHI POPULAR, and dare I say, successful!

And if Kia can produce a massive 3-row full-size SUV that has Torque Vectoring AWD (and they actually use this term, which people will immediately identify with as TV, as opposed to ... "what the heck is S-AWC?") , a large engine, and a proper automatic transmission... WHY can't Mitsubishi do the same?
It's wasting its potential. And really... they didn't have to reinvent the wheel here. Literally.

Sorry that I keep repeating myself, guys. I just need to feel the love again. Because my experience with purchasing and driving an EC isn't enough to make me buy a new Mitsubishi anytime soon. Maybe old ones, but certainly none of the new ones.
Unless they do something else to change my mind.
L

wasabi said:
Mitsubishi's biggest mistake was using the Eclipse name.
By doing that they're essentially trying to pass it off as something sporty. Its actually not once you look past its sporty design. Everything else says otherwise. I'm not complaining however, its what every other automaker does.
Click to expand...

If they had named it anything else the tune would be completely differently. The name change never bothered me either but I know so many people who were livid about the announcement. Aside from that most of the feedback I've seen has been positive.
N

Joined Jun 21, 2019
·
4 Posts
Probably because it is such a departure from the old Eclipse. Nostalgia is a tough thing to overcome, particularly when the original was so good.
W

Joined May 9, 2017
·
196 Posts
On the bright side of this SUV being a sporty name, maybe it means they'll give us a sportier version down the road? 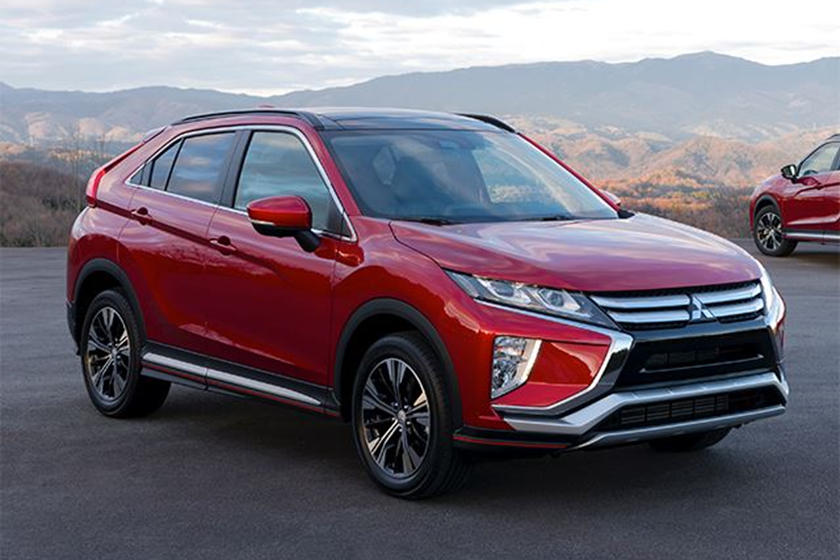 When the Mitsubishi Eclipse Cross was revealed, it was hard not to be disappointed. Merging sleek coupe loo...

How about you take that, and compare with this:

Get outta here, man
Stickers and lowering springs do not a great car make.